Skip to content
Down, But Not Out: The Current State of Investment Banking

Down, But Not Out: The Current State of Investment Banking

Investment banking has had a difficult decade. Tight new post-crisis rules decimated trading revenues and a sluggish global economy sent advisory arms into a slump. At the same time, evolving technologies have placed a strain on business models and changing staffing needs have made finding the right talent increasingly challenging. Yet, despite the many issues facing the industry, it nevertheless has many important strengths. Talented young workers from top schools still dream of investment banking careers and the industry still performs innumerable vital capital markets functions. Investment banking may be down, but it is far from out.

Despite its glamorous image, investment banking has struggled to recover from the devastation of the global financial crisis. In its aftermath, revenues from traditional investment banking activities steadily declined for a decade and then, after briefly stabilizing in 2018, resumed their downward momentum in 2019.

Today, Deloitte reports that combined revenues at the top banks are at their lowest level since 2006. As a result, many industry leaders are asking hard questions about the future of investment banking.

There are many reasons for the slump in investment banking revenues.

After the financial crisis exposed serious gaps in risk management models, regulators imposed many new restrictions on banks. In particular, they targeted banksʼ proprietary trading operations, which were viewed as a key source of systemic financial risk. New rules – such as the Volker Rule, introduced in the US by the Dodd-Frank Act – broadly prohibited banks from trading on their own account. Once a major source of revenue, trading desks at bulge-bracket banks were decimated by the new regulations.

At the same time, aggregate market volatility declined during the long bull market that began in March 2009. As volatility declined, overall trading volumes fell. High frequency trading (HFT) outfits have seen their profits plummet, as have investment banks with large trading operations, which have seen reduced trading appetite among clients.

In addition to tightening rules on trading, regulators also increased regulatory capital limits. This raised the cost of investment banksʼ traditionally sizeable underwriting operations – underwriting is a process by which banks take on a certain amount of financial risk in exchange for a fee, generally by agreeing to buy certain securities under particular circumstances. Rather than increasing their capital reserves, many big banks chose to shrink their underwriting businesses along with their trading arms. The process has been exacerbated by a growing number of companies raising capital directly from loan funds, without using underwriters.

With trading and underwriting volumes in retreat due to cyclical, structural, and regulatory factors, investment banksʼ advisory services have become their key revenue source. There too, however, there are challenges. 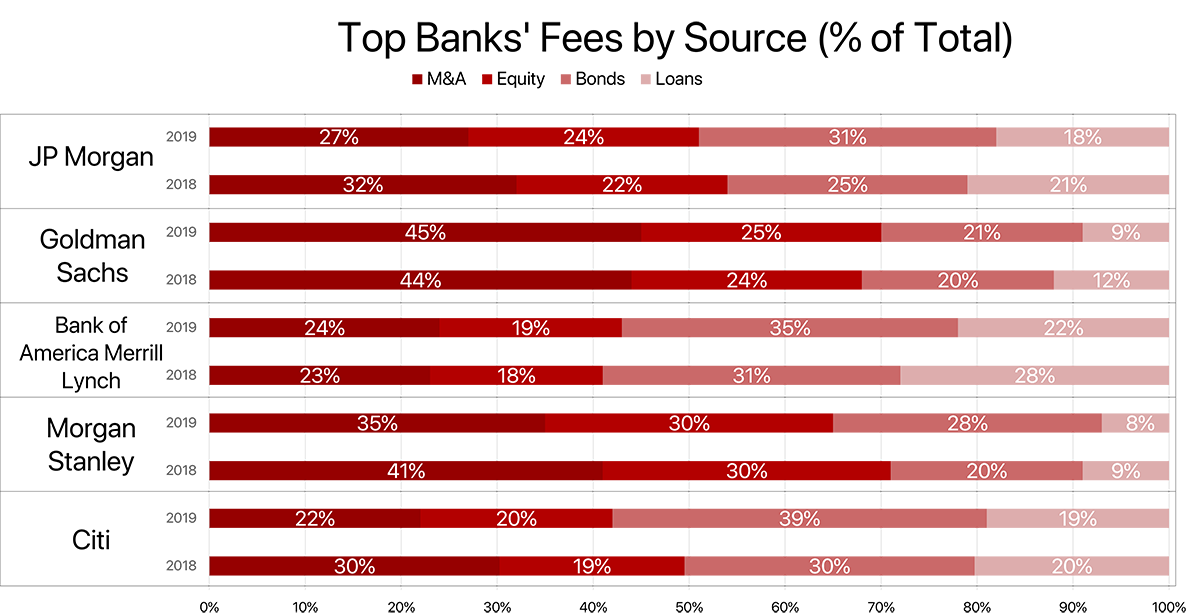 Changes in technology are having a disruptive effect on the advisory operations of the investment banking industry. AI is taking on a greater role in assessing market opportunities. Sophisticated AI systems are now able to identify potential M&A targets, for example, and many middle- and back-office functions can be outsourced to smart systems thanks to robotic process automation (RPA). Technology is also making it easier for clients to negotiate and trade directly, making investment banksʼ traditional intermediary function increasingly obsolete.

Technological improvements in access to market data and cheaper computing power mean that new competitors are being attracted to the investment banking industry. For example, a growing number of small, even one-person firms – often founded by former employees of top banks – are competing for and winning advisory business, such as structuring complex derivatives.

These problems in the advisory business are being exacerbated by changes in financial markets. Thanks to abundant private equity and venture capital, companies are remaining private for longer, hitting banksʼ initial public offering (IPO) business. Furthermore, a growing number of companies are opting for direct listings, which bypass investment banker underwriters to list directly on public markets. Banksʼ advisory revenues are thus being squeezed on all sides.

In response to the challenging environment, investment banks have been forced to cut costs and realign their business models, which meant major layoffs at many large institutions. This has been particularly true of European banks, which have been losing ground to their US peers and struggling to find a business model that works.

Yet, even as banks have been forced to cut staff, they have also been struggling to find new talent. In todayʼs technologically sophisticated environment, banks need staff with both technical programming skills and traditional financial skills – as well as the interpersonal skills that are important for nurturing client relations. Finding talent with the right mix of skills is a challenge, particularly given the stiff competition for those with software skills from large tech companies and, increasingly, FinTech startups.

Despite these many challenges, investment banks continue to enjoy certain advantages. New technologies offer the potential for significant costs savings at the middle- and back-office level, which could enable banks to lower the cost of their services for clients. Their deep and long-lasting relationships with corporations, asset managers, and wealthy individuals remain a core strength, helping banks to attract business and close deals.

US banks have benefited from the weakness of their European competitors and today, they claim the majority of global investment banking revenues. This puts them in a strong position to fend off new competitors and to attract the talent they need to compete in todayʼs changing – and challenging – environment.