Skip to content
From Crisis To Opportunity: Central Banks Seize The COVID-19 Moment To Embrace Change

From Crisis To Opportunity: Central Banks Seize The COVID-19 Moment To Embrace Change

Central banks worldwide are embracing extraordinary policies in a bid to stave off the worst economic impacts of the COVID-19 pandemic. The US Federal Reserve has announced a dramatic shift in its monetary policy approach, for example, and the European Central Bank has taken the unprecedented step of allowing for deviations from the capital key in its bond purchases. These and other developments suggest that the pandemic may lead to lasting changes in how the world approaches economic management and monetary policy.

2020 has been a year of extraordinary change. Millions of employees rapidly shifted to working from home, businesses retooled their product lines and processes virtually overnight, and teachers and students switched to online learning as education systems shuttered.

The upheaval caused by the COVID-19 pandemic has reached even the most conservative institutions, including central banks. The US Federal Reserve (Fed), for example, in August announced the most sweeping changes to its monetary policy approach in decades.

The Fed conducts its monetary policy under a twin mandate to promote both maximum employment and price stability. In the past, the central bank has interpreted this mandate to mean that it should keep inflation at or below 2% and that it should act – usually by raising interest rates – when unemployment falls to a level the Fed deems likely to promote higher inflation.

While this broad approach worked well in the decades following the 1970s when the Fed was grappling with inflation, it has been less appropriate in recent years and, indeed, has led to undesirable outcomes.

As the chart below illustrates, the Fed began raising interest rates in late 2015, even though inflation remained well below target. It continued raising rates throughout late 2018 and early 2019, even as inflation again fell below target. Some argued that the Fed’s decision to steadily raise rates led to slower economic growth and lower wage growth. 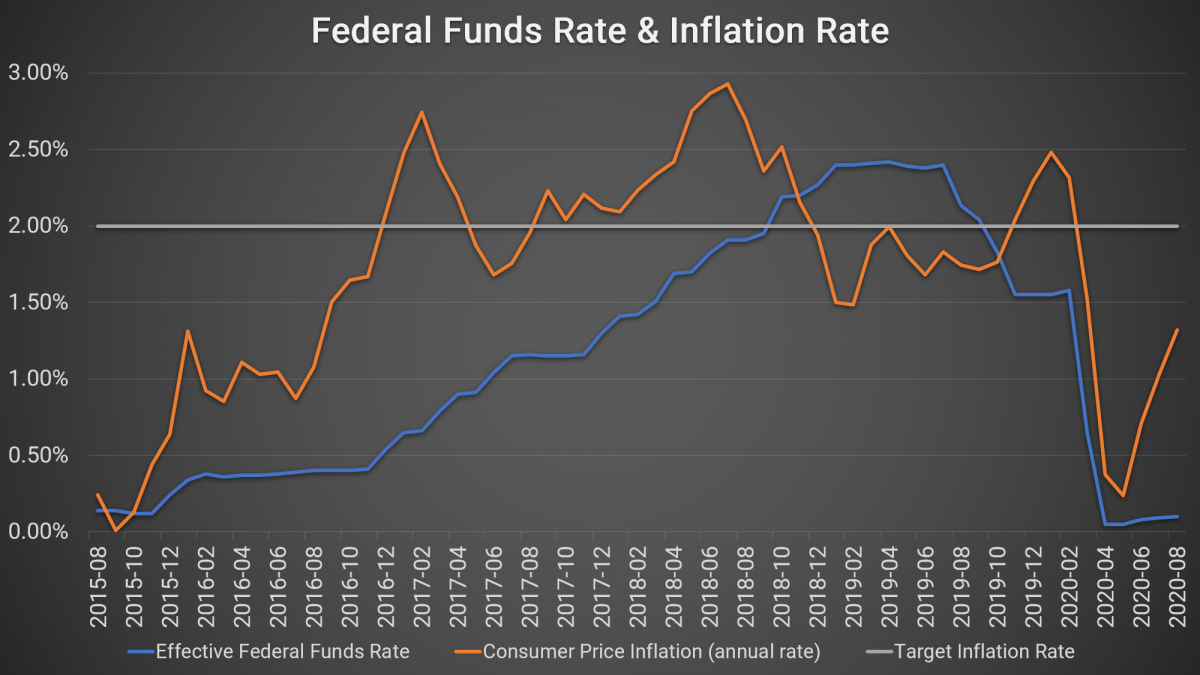 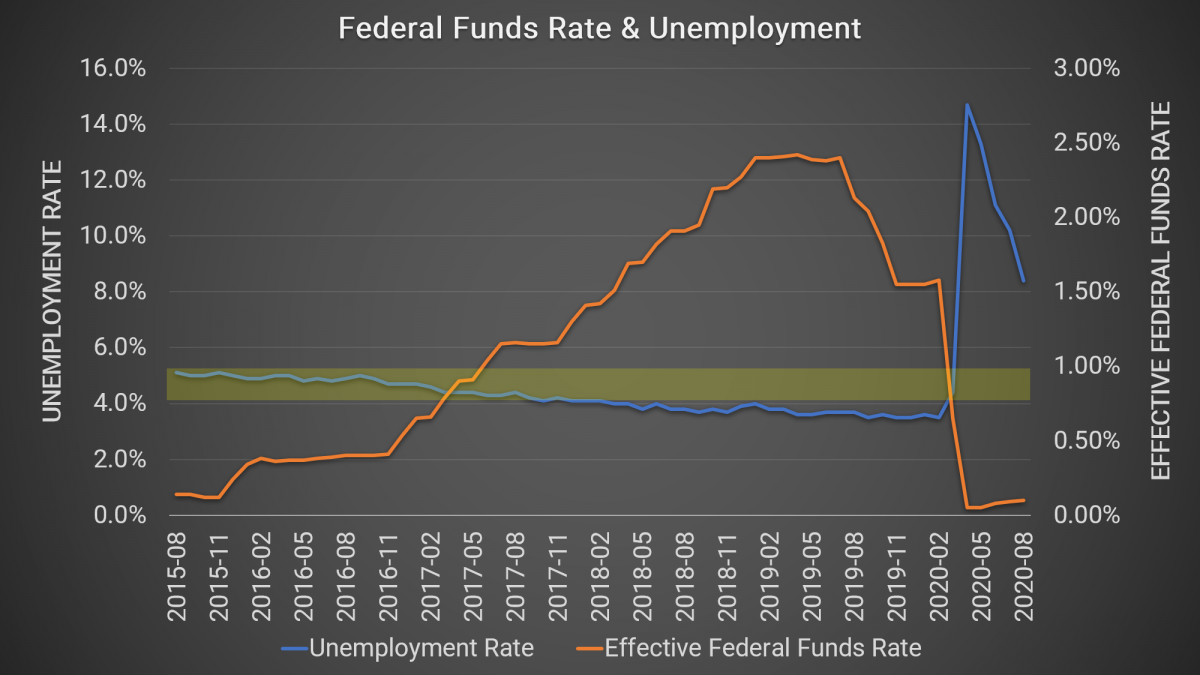 While these changes may seem relatively modest, by central banking standards they are consequential. The inflation-targeting change implies that the Fed will actively seek periods of above-average inflation after periods of below-average inflation in order to achieve an average rate of 2%, and the decision to no longer raise rates preemptively when unemployment falls below a certain level is a significant departure from the policy of the last five years.

The Fed is not the only central bank engaging in extraordinary monetary policies.

In the European Union (EU), for example, the European Central Bank (ECB) announced that it would deploy funds under its Pandemic Emergency Purchase Program (PEPP) in a “flexible manner.” While this does not sound revolutionary, in the language of the EU’s central banking it was an important departure from
standard practice – usually, the ECB’s bond-buying programs are scaled in proportion to the capital key, which reflects each EU country’s population and contribution to euro area GDP.

By unhitching the PEPP from the capital key, the ECB gave itself the flexibility to provide support where needed, even if that meant a greater amount of smaller countries’ bonds would be purchased. This move was widely regarded as a step in the direction of a more comprehensive capital markets union among euro area economies, something that many politicians and policymakers have advocated for a number of years.

More broadly, central banks around the world have enthusiastically embraced monetary policy stances in the wake of the crisis that would have seemed impossible even 15 years ago.

The ECB, the Fed, the Bank of Japan (BOJ) – and, to a lesser extent, the Bank of England – have embraced direct asset purchases and virtually unlimited bond-buying programs, as well as a range of extraordinary measures related to bank capital, lines of credit, and previously unimaginable negative interest rates.

As monetary policy innovation continues apace and central banks enter new asset markets – in the US, for example, the Fed rolled out a program to lend directly to small businesses – many worry about the long-term inflationary impact of today’s policy choices.

Yet, after two decades of steadily falling inflation in advanced economies – despite historically low interest rates – many observers believe that such policy innovation is necessary and appropriate to restore wealthy economies to robust health. 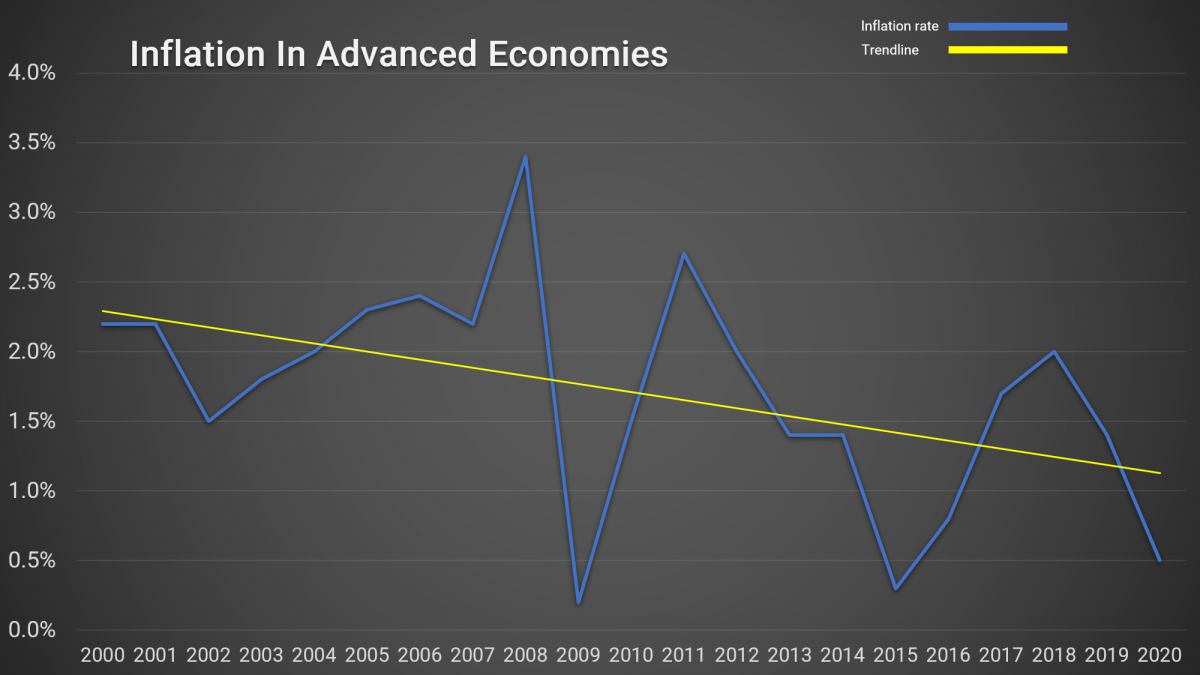 Intuition Know-How has a number of tutorials that are relevant to monetary policy and central banks: