Skip to content
Australia China Trade War And Its Implications 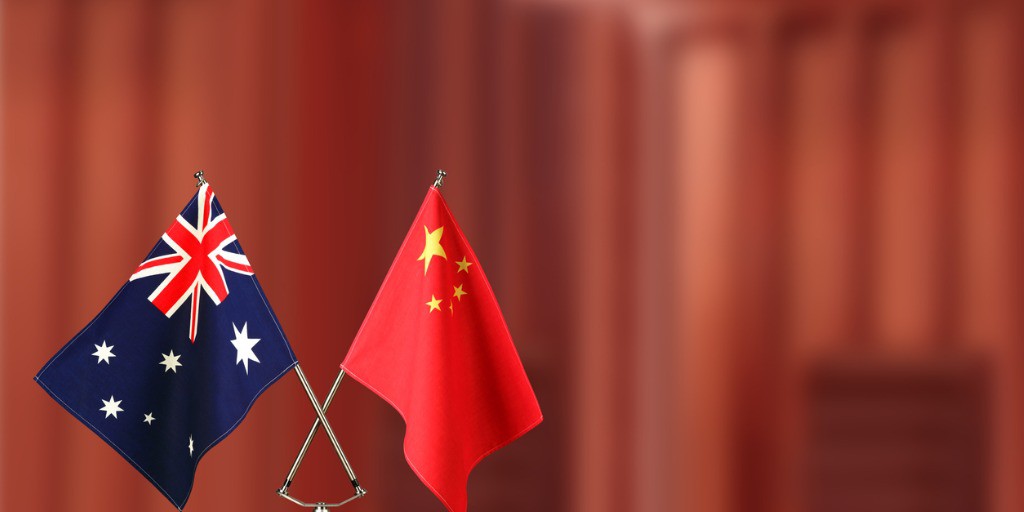 The current China and Australia trade dispute is actually a war of words and trade restrictions. And it is largely one way, why? China is imposing barriers with seemingly little response from Australia. The reason is the relative high importance to Australia of cross border trade between the two. Any reciprocal Australian tariffs or restrictions on Chinese imports would damage AU businesses and economy in a significant manner

The relationship between the two countries has deteriorated since Australia supported a call for an international inquiry into China’s handling of the coronavirus when the pandemic became an international issue. It has steadily increased and at the end of 2020 Australian news agencies reported that the Chinese embassy had threatened the Aussie government with further action; and handed over a list of alleged grievances toward Canberra. China has taken several selective measures that impede Australian trade, ranging from levying tariffs to imposing bans and restrictions.

In the markets, after initial weakness caused by the tensions in early 2020 and also global trade downturn caused by the pandemic, AUD remains well-supported as risk demand, long-run US dollar weakness and commodity prices underpin AUD strength. AUD has performed similarly against the CNY. Global market forces have overridden the negative effects of China’s one-sided trade war, but if these were to be resolved, it would add positive impetus to the AUD. In the meantime AUD is riding the positive commodity narrative and has arguably recovered the quickest and stringiest of all developed nations. 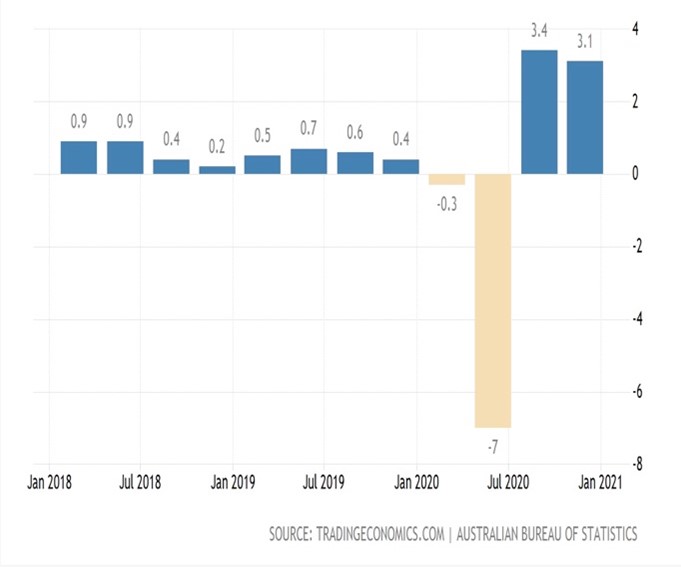 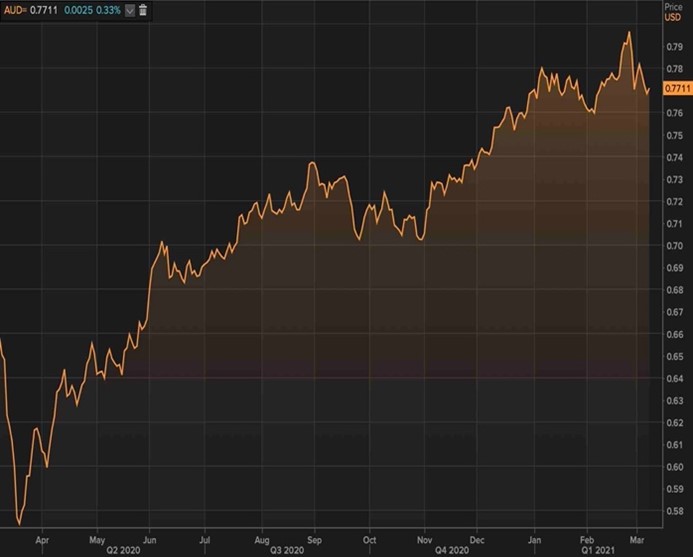 Analyzing the trade relationship, China is Australia’s largest trading partner and by far its top export destination. Then importance is unique to Australia in that it is one of the few developed nations on Earth that exports more into China than it imports from China.

Currently China takes in about 1/3 of all Australian exports. By far the largest export is iron ore. 2019-2020 China EXP $150b; IMP $81B. 2014-2019 5 yrs exports doubled and imports increased by 42%. After the spat started, also impacted by a slow down in trade anyway due to the global pandemic, in the first half of last year trade was down significantly and was in reality only supported only Iron Ore.

So what areas are under threat? China has slapped tariffs/restrictions on wine, barley, coal, lobsters, timber, red meat and cotton. Very widespread. Barley has duties of 80.5% effectively barring Australia exports to China. China Claimed AU was dumping Barley on CH markets damaging local producers. Australia has lodged an appeal through the WTO. Wine received anti-dumping duties between 107% and 212% which followed China’s anti-dumping probe into wine imports from Australia. China levied additional temporary tariffs of around 6.3% to 6.4% earlier this month following a separate probe into Australian wine subsidy schemes. China suspended imports from 6 beef suppliers, issues purportedly over labelling and health. In late 2020 lamb exporters were unable to export to the Chinese market under Covid-19 restrictions and now honey, fruit and pharmaceutical exports to China are at risk. Tons of live lobsters were stranded at Chinese airports and clearing houses, awaiting inspection from customs. AU’s Seafood Trade Advisory Group said last month the industry temporarily stopped rock lobster exports to China as a result. Australia’s agriculture minister has said the government worries Chinese officials are telling millers to block Australian cotton and China has banned timber imports from the Australian states of Queensland, Victoria, and more recently, South Australia and Tasmania.

Finally with the new industrial stimulus in China, media have said that the Chinese Govt granted approval to power plants to import coal without clearance restrictions except for Australia. Coal is Australia’s third-largest export to China.

So as mentioned, unsurprisingly China has not introduced any restrictions on Australia’s biggest export to the country Iron ore. This is purely self serving as China is reliant on AU iron ore (over 60% comes from AU), and is increasingly important now to China due to aggressive industrial-led stimulus. It is unlikely that the iron ore trade would be significantly affected from any China led action. So in reality if Australia wants to get tough this is the export it could threaten China with, but would it have the appetite to do so? Unlikely.

Australia obviously has to be smart because of the relative importance for AU-CH trade to Australia compared to the importance for China. As a result they will most likely look for official no inflammatory ways to manage the ongoing dispute. Hoping to repair relations rather than use a Trumpesque style. Also if current conditions prevail they are able to ignore domestic rumblings sand demands for stronger actions against China because Australia is doing well economically and relatively globally, and so can use diplomacy as it has the time and economic conditions to do so. However China will know this and as a result will largely be free to do as it wishes for domestic political purposes without fear of Australian action. Expect further spats to continue for some time with little overall effect on economies and trade as a whole unless other forces globally cause the trade dispute to grown in importance to both parties. However if global conditions continue and there were an end to the trade frictions, any news to this effect would likely be very positive for the AUD and the Australian economy.

Get in touch with your Intuition account manager at asiainfo@intuition.com for more details.