Banks have begun to grapple with the costs of implementing the Final Basel III Framework. European banksʼ estimates put the price tag of meeting increased capital requirements at around €400 billion and they warn that the rules could shrink lending by as much as €2.9 trillion. In contrast, the European Banking Authority (EBA) estimates that the new capital requirements will cost just €135 billion. As European authorities prepare to develop implementing regulations, industry voices are warning that handled poorly, Basel III could cost Europe 0.5% of its GDP growth. There are lessons aplenty to be drawn from Europeʼs experience as the rest of the world prepares to tackle the new rules. 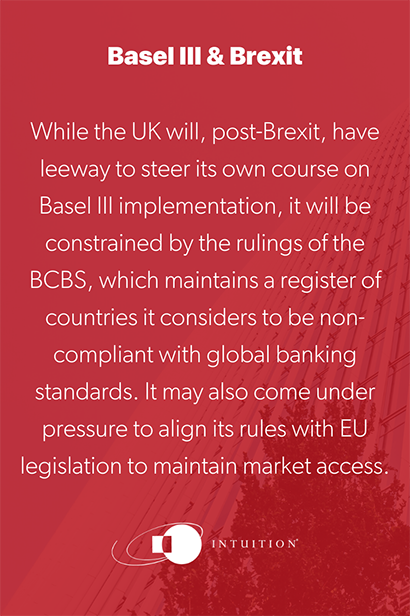 When the Basel Committee on Banking Supervision (BCBS) finalized its revised banking industry rules in late 2017, the Final Basel III Framework – sometimes colloquially referred to as Basel IV – was immediately controversial. Banks warned that the new rules would increase capital requirements and reduce lending – and could potentially lead to increased risk as banks clustered into certain lending sectors

In Europe, regulators have begun work on developing regulations to implement the Final Framework across the EU. As they do, the banking industry is sounding ever-louder warning bells.

In August 2019, the EBA published advice on the implementation of Basel III in the EU. Its quantitative assessment found that the new rules would increase banksʼ minimum capital requirement (MRC) by an average of 24.4%. Based on current bank capitalization levels, the EBA estimated that the increased MRCs would create a capital shortfall of €135.1 billion, of which €58.7 billion would materialize in 2027 (when the last of the requirements must be fully implemented).

However, a November 2019 report by Copenhagen Economics (CE), conducted on behalf of the European Banking Federation (EBF) and UK Finance, argued that the EBAʼs assessment underestimates the amount of capital involved. According to the report, banks typically hold capital buffers in addition to the required minimums and, if these buffers are kept at current levels, the actual capital shortfall would be between €300 and €400 billion – a far more substantial funding burden.

The report also argued that the new rules may disadvantage European banks relative to their US peers – in CEʼs analysis, US capital requirements will not increase in line with European ones, increasing European banksʼ capital costs compared to US banks. In addition, the report claims that the increased capital requirements, as well as new constraints on modeling credit risk and various other changes, could significantly reduce bank lending.

Faced with higher capital requirements, banks can choose to either increase their capital or reduce their assets – they could trim their balance sheets until their current capital levels are sufficient to meet the required thresholds. According to the CE report, if banks choose to deleverage rather than increasing their capitalization, this could reduce available credit by €2.9 trillion.

Such widespread deleveraging seems unlikely. More realistically, banks may choose to pursue a combination of raising capital and shrinking their balance sheets, leading to some reduction in lending and an increase in lending costs. Through this mechanism, the Framework may reduce economic growth.

The EBA has recommended the full implementation of the Final Basel III Framework, with a few relatively minor modifications. In contrast, the CE report recommends a number of fairly substantial adjustments to the Framework that would reduce the increase in MRC to 6-10%, thus mitigating some of its potential economic and competitive impacts.

Europe is the first major jurisdiction to begin the process of implementing the revised Basel III requirements. Its experiences are certain to impact the debate in the US, which has not yet begun its public implementation discussions.