Venture capital and private equity have boomed in the last ten years. McKinsey estimates that private market assets under management hit $5.8 trillion in 2019 and that private funds are sitting on dry powder of over $2 trillion. Fueled by cheap debt and investors hungry for yield, the size of private deals has been steadily rising, as have their multiples. In the face of this, some market observers are sounding the alarm on private valuations, especially in the wake of high-profile disasters such as the failed WeWork IPO and the collapse of a number of debt-laden, private equity-backed retail chains.

The last decade has seen a dramatic boom in private capital markets. Between 2013 and 2018, private equity (PE) fundraising grew by a compound annual growth rate of almost 8% and PE assets under management (AUM) exceeded $3.4 trillion at the end of 2018.

Much of this growth in fundraising was fueled by investors’ search for returns in a low-yield world. Since the financial crisis, ultra-low interest rates have made fixed income assets unattractive and growth in public equity markets has been lower than that available in private markets. Against that backdrop, institutions – particularly pension funds struggling with sizeable asset/liability gaps – dramatically increased their private equity allocations. 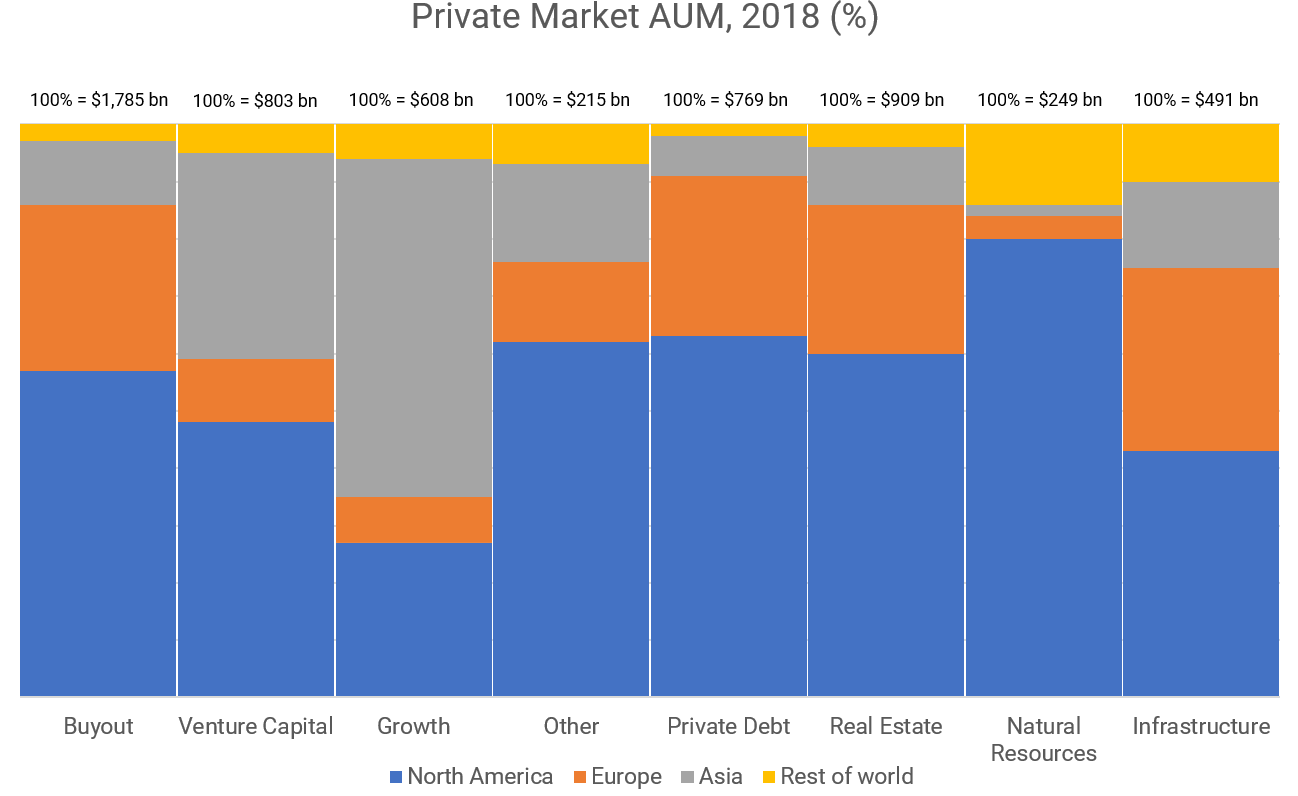 Source: McKinsey. The chart shows the percentage of private AUM according to asset class and indicates the total AUM per asset class in US dollars.

Debt also played a role in the explosion of private market AUM. Low interest rates meant abundant cheap debt, and private investors – such as buyout PE funds – capitalized on this. The easy availability of cheap debt meant that firms could supercharge the size of their deals. Adding to that, many private funds currently hold a significant amount of unallocated capital or dry powder – as much as $2.1 trillion at the end of 2018, according to McKinsey.

However, this combination of strong fundraising, abundant capital, cheap debt, and a powerful appetite for deals has led to a steady rise in private asset prices. This is because, as appetite for private deals grew, the number of attractive investment opportunities remained relatively constant. As a result, PE deal multiples have risen steadily and, by the end of 2018, were close to their 2007 pre-crisis levels – although debt levels remain below their 2007 highs. 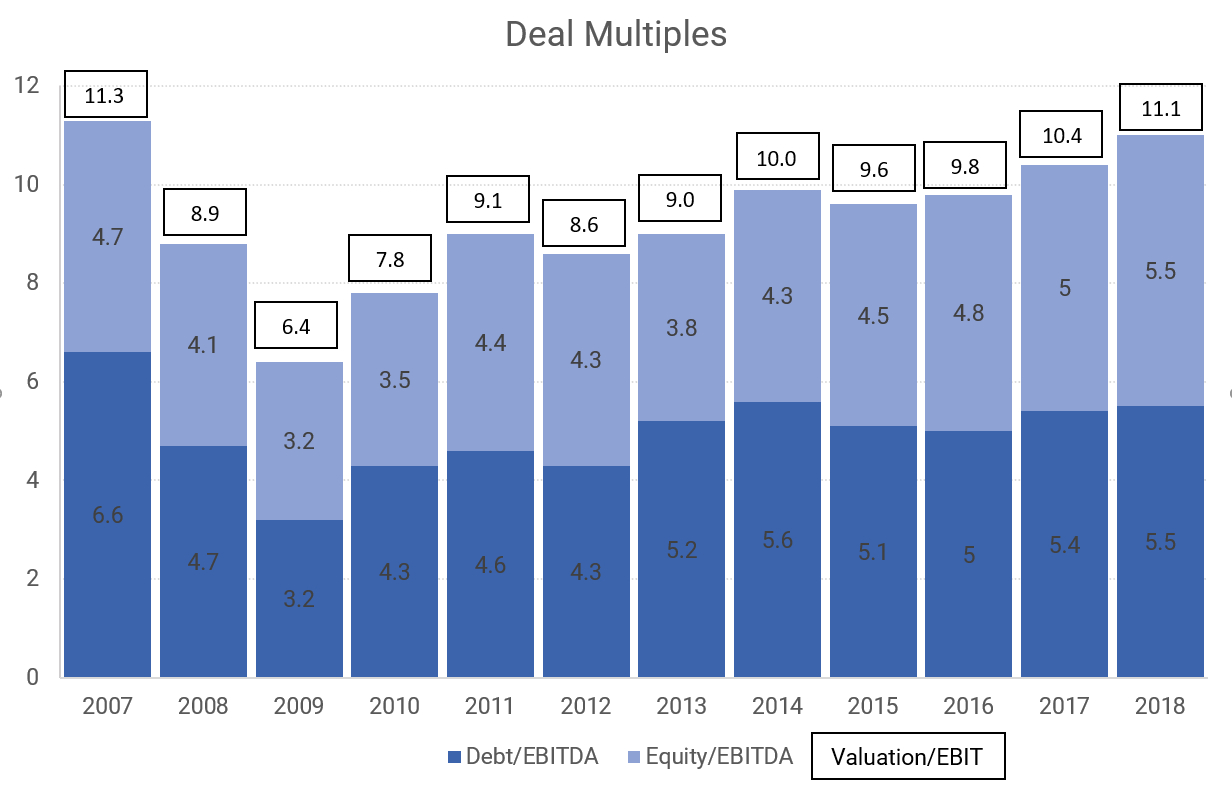 Source: McKinsey. This chart shows the ratio of debt, equity, and total valuation to earnings before interest, tax, depreciation, and amortization (EBITDA). Discrepancies in totals due to rounding and deal structure.

Rising deal prices have led to concerns about valuation levels in private markets, particularly in the highly leveraged buyout space and the fast-growing venture capital sector. Indeed, academic research indicates that, over the last five years, PE returns have converged with public market returns, due in large part to rising valuations.

Interestingly, as Bain pointed out in its recent private markets report, the traditional gap between higher public market multiples and lower private market multiples has narrowed considerably in the last five years – and in some cases, reversed entirely – suggesting that investors are willing to overlook the opacity and illiquidity of private markets in exchange for the potential for high returns. All of this has implications for the future of both public and private markets.

PE exit volumes have been essentially flat since 2015, although much of this slowdown can be attributed to mean reversion after funds unwound their long-held, pre-crisis deals. Another factor may, however, be the slump in IPO exits.

There is mounting evidence that IPO exit strategies are losing favor. IPO activity in the US has declined since the 1990s, and various high-profile IPOs have struggled in recent years due to the mismatch between private and public valuations.

In 2016, for example, a private capital-raising round valued ride-hailing firm Uber at just over $68 billion. The company’s IPO in May this year priced above that level, but since then, its public market valuation has fallen to less than $50 billion.

This performance knocked public market confidence in sky-high private valuations, as illustrated by the failed WeWork IPO. Private money valued WeWork at around $47 billion, but the company was unable to place its shares, even at a valuation of less than $20 billion, and the IPO was withdrawn.

For public markets, this may mean less access to high-value, high-growth companies. However, for private markets, the narrowing of exit strategy options may create some risk of capital losses or falling prices. Any change in risk sentiment or interest rates could send PE valuations falling and dampen returns for years to come. There is also a risk of regulatory attention, particularly if the rotation into private equity harms retail investors.

Intuition Know-How has a number of tutorials that are relevant to private equity and company valuations: