Around the world, rich economies are facing a historically unprecedented set of problems, including aging populations, slow growth, low or negative interest rates, and deflation. This novel set of economic issues, which has emerged in country after country over the last few decades, demands novel policy solutions. Among the slate of possible options is so-called Modern Monetary Theory (MMT), an unorthodox – and highly controversial – approach to government finances that allows for significantly expanded government spending. MMT has many critics. However, some important lessons from Japan suggest that MMT – or something like it – just might work.

In Japan, across Europe, and even – to a lesser extent – in North America, wealthy nations are falling prey to a common set of problems. So far, few have risen to the challenges they pose.

For several decades, interest rates in wealthy countries have been in a long-term, secular decline. This has increasingly curtailed central banks’ ability to stimulate the economy by lowering interest rates. Indeed, both the European Central Bank (ECB) and the Bank of Japan (BOJ) currently have negative interest rates, and most global central banks have been running – in real terms – a zero interest rate policy (ZIRP) since 2009, to little effect. 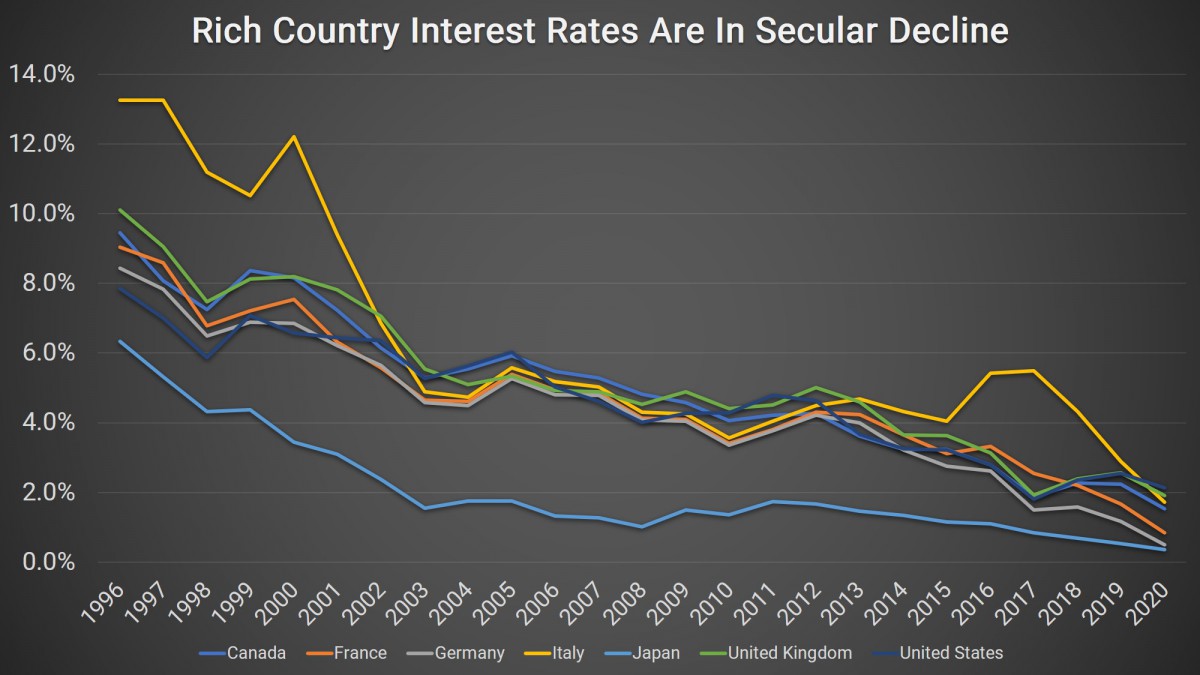 With persistently low interest rates has come low inflation. Consumer expectations have capped companies’ ability to raise prices and, in many sectors, deflation has emerged. Some argue that stubbornly low inflation has constrained investment and perhaps even discouraged consumer spending, as consumers have little reason to fear rising prices.

As a consequence of all this, economic growth has been persistently sluggish, particularly in Europe and Japan, and, while employment growth has remained relatively strong, wage increases have been minimal, further constraining household spending.

Some economists attribute this constellation of economic challenges to demographic shifts. Advances in medicine have increased longevity, and life expectancy in the rich world has risen to well above 75 years. At the same time, birth rates have fallen. This has meant that the average age of the population has risen steadily, as has the proportion of older and retired people. With fewer young workers, economic growth has been constrained and rising life expectancy means that younger cohorts are saving more and spending less in anticipation of an extended retirement. These dynamics may have contributed to the general sluggishness in rich economies. 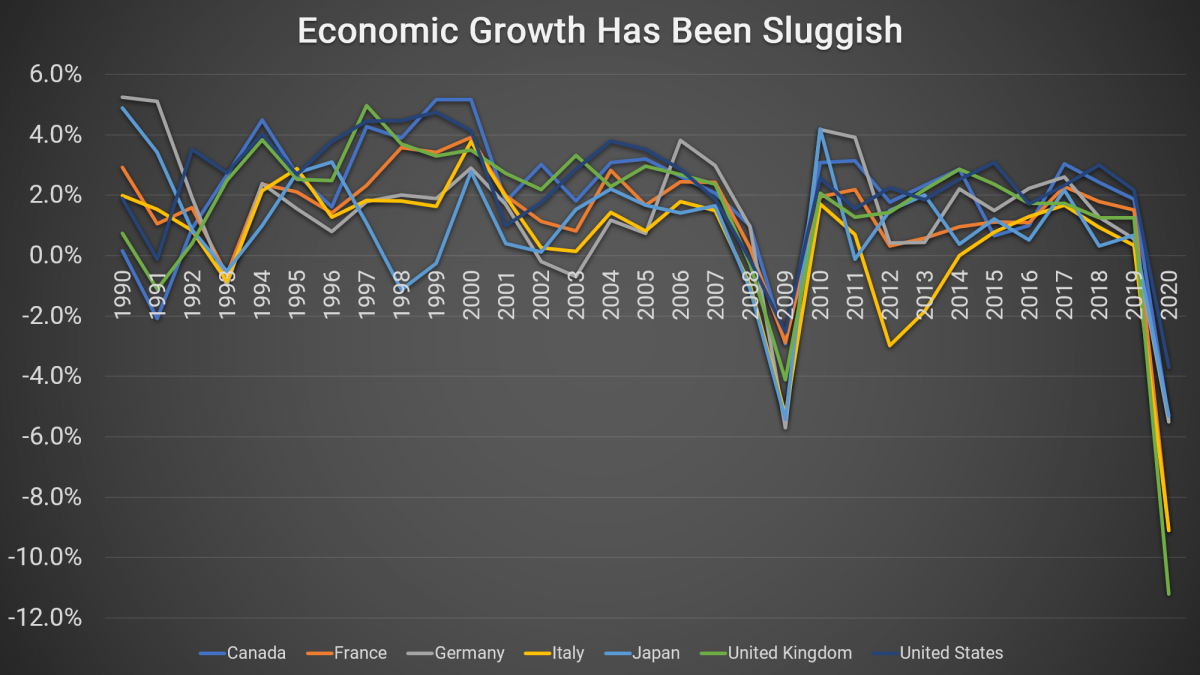 Looking for a way out

With monetary policy tools – even extraordinary measures like quantitative easing – proving increasingly ineffectual in combating slow growth, politicians and economists are looking to new and emerging theories for ideas on how to boost their countries’ economic fortunes.

One policy prescription that is gaining ground is Modern Monetary Theory (MMT). Despite its name, MMT is not exclusively focused on the actions of central banks – instead, it is a novel approach to government finances more broadly.

At its core, MMT argues that it is a mistake to think of government finances in the same way that we think of household finances, with taxes representing income and expenditure representing outgoings.

Under this traditionally dominant line of thinking, government spending is constrained by a perceived need to balance the budget by spending no more than is received in tax revenues, just as household spending is constrained by households’ need to live within their means. When governments spend more than they take in and run budget deficits, they must borrow money in the capital markets to make up the difference.

This borrowing is seen as a bad thing – the government is perceived to be in competition with other borrowers, such that every dollar the government borrows is a dollar that banks and households cannot borrow. Further, by increasing the demand for loan funds in the market, governments push up interest rates. Thus, budget deficits are problematic because they “crowd out” other borrowers and thereby hurt growth. In addition, borrowing increases governments’ spending on loan interest and may, therefore, crowd out spending on other items.

MMT argues that this understanding of how government finances work is fundamentally incorrect. There is no external “supply of money” that governments and other borrowers must compete over. Rather, governments – at least those that issue their own currency and pay for their spending in that currency – create money as it is needed, as do banks when they issue loans in modern fractional banking systems. 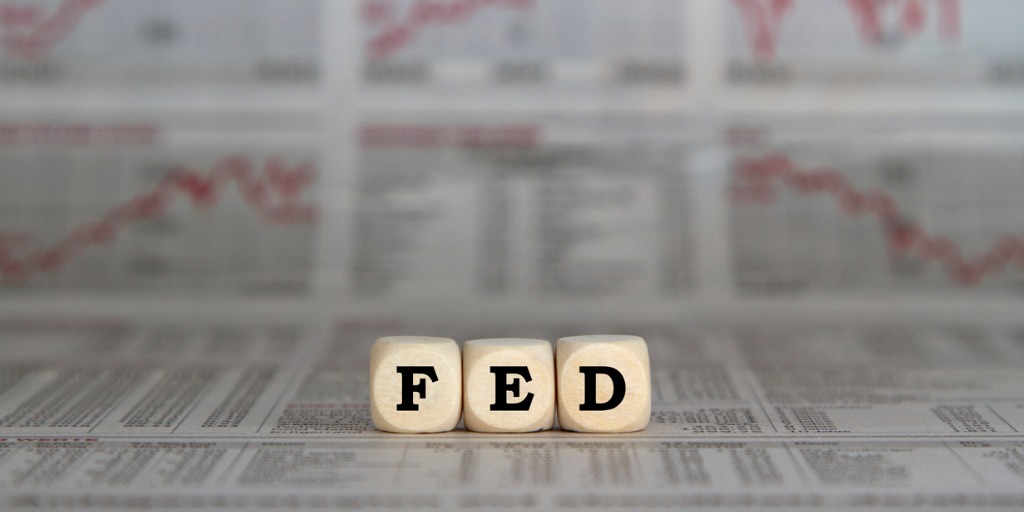 Therefore, there is no possibility of such governments being “unable” to pay for their spending or repay their debts (provided these debts are denominated in their domestic currency), no matter how little tax revenue is collected. If the US government, for example, wants to spend $100 trillion, it can easily do so – it has the unique and sole right to issue US dollars and so could print all the money it needs to finance any level of spending it desires. For MMT theorists, then, government spending is not constrained in any meaningful sense by tax revenues, and budget deficits are irrelevant. (As a corollary, crowding out is an imaginary problem – banks and governments create money as needed rather than distributing a preexisting “pile” of money, so there is no actual competition between government and other borrowers.)

In MMT, the only real constraint on government spending is inflation. If governments spend too freely/create too much money, they run the risk of driving up inflation. MMT argues, however, that this would only happen if the economy’s productive capacity – its workers, machinery, and resources – were to reach and exceed maximum capacity.

If correct, MMT has various implications. For one thing, it means that government spending and taxation are simply ways to add or remove money from the economy.

Taxation, in MMT terms, does not exist to “fund” government spending. Instead, it exists to encourage people and businesses to use the government’s currency (because they must pay taxes in US dollars, UK pounds, and so on) and to remove money from the economy when there is too much in circulation.

Conversely, government spending acts to put money directly into private bank accounts and to boost banks’ reserves, enabling them to lend more and thereby add money to the economy.

Some MMT theorists argue that the implication of all this is that, because governments spending more than their tax intake is necessary to create private-sector surpluses, budget deficits are all but inevitable (unless there is a large volume of exports or under certain other circumstances). If a government were to consistently tax more than it spends, it would be pulling money out of the economy and risking a recession. Therefore, governments can and should spend as much as needed to boost growth and employment, without worrying about deficits (although they must be cautious about inflation).

For most mainstream economists, policymakers, and central bankers, MMT is highly problematic and impractical. Implementing the full range of its policy prescriptions would, essentially, mean that governments would take the job of printing money away from central banks and give it to elected legislatures, which would determine how much money to create by setting government spending and taxation levels. This, critics argue, would open the monetary floodgates, and quickly lead to hyperinflation without having any meaningful impact on underlying economic growth (which is primarily driven by productivity enhancements, technology, and resource exploitation).

The experience of Japan, however, suggests that some of critics’ concerns may be overblown.

Japan has had negative or zero real interest rates and run a massive quantitative easing program (effectively, it has been freely printing money) for many years without any sign of hyperinflation. Indeed, inflation in Japan remains historically low.

At the same time, the country has engaged in aggressive fiscal stimulus, again with no inflationary impact and no sign of interest-rate-boosting crowding out. Japan currently has by far the world’s highest public debt burden – its debt-to-GDP ratio is close to 250% – yet its interest rates, like inflation, remain very low. What’s more, its free-spending strategy has paid off in growth terms – between 2003 and 2019, Japan had the third-highest GDP per capita growth rate in the G7.

As other rich countries grapple with slow growth and ineffectual monetary policy, many will be looking to Japan as a test case for MMT (Japan’s economic approach is by no means aligned with MMT thinking and Japanese leaders disavow the MMT label, but many commentators consider it to be “MMT-lite”).

After all, if the Japanese government can spend and borrow freely while maintaining its high living standards and keeping inflation and interest rates low, why can’t others?

Intuition Know-How has a number of tutorials that are relevant to monetary policy and the economy: