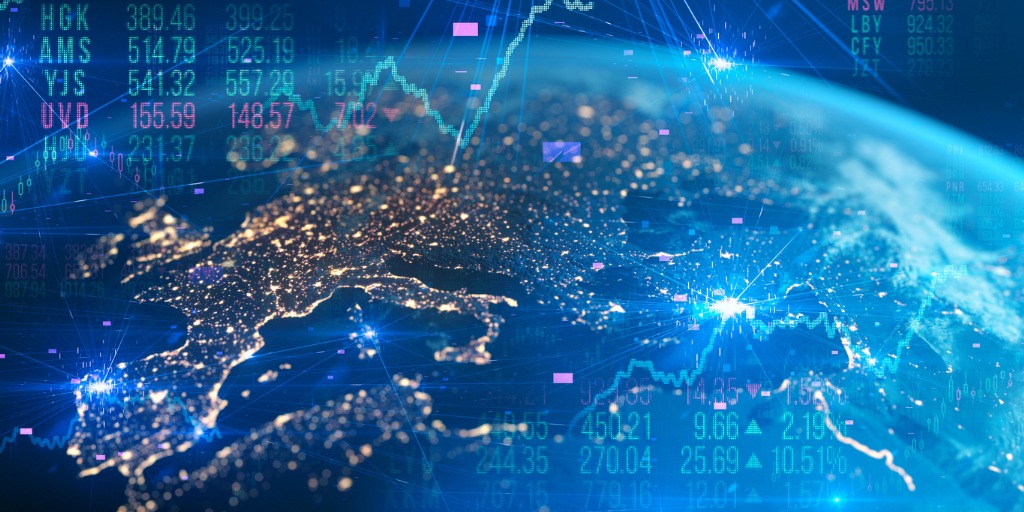 During the pandemic, governments in wealthy countries rolled out massive business support programs, which often took the form of soft loans to companies that suffered revenue losses during lockdowns. While these loans undoubtedly helped businesses survive a difficult year, many observers worry that they may have unintentionally created a plague of zombie firms – firms that are just barely solvent and unable to grow but kept artificially alive by low interest rates and anxious banks and policymakers. As we look ahead to economic recovery, many are asking what the rise of the zombie ranks means for long-term global economic health and investors.

Governments worldwide responded to the global pandemic with a range of income and business supports. In wealthy countries, the packages on offer were generous. Most European countries provided significant income support for furloughed or laid-off workers, while the US and others boosted unemployment benefits dramatically. Virtually all countries with the means to do so also rolled out a range of low- or no-interest loan programs targeting businesses that suffered revenue losses due to the crisis.

However, they also led to a massive build-up of debt on businesses’ balance sheets. In the UK, for example, the British Chamber of Commerce reported that 40% of companies took on debt during the crisis, while S&P Global reports that, in the US, total debt held by nonfinancial corporations surged to a record high of 83.5% of GDP in the third quarter of 2020, up from 75.7% at the end of 2019.

At the same time, monetary policy eased. Central banks around the world slashed interest rates, helping to lower the cost of borrowing for businesses. This helped further drive the corporate debt boom, particularly in the United States, as companies flocked to capital markets to refinance existing debt and issue new bonds at favorable rates.

In general, these fiscal and monetary measures have been regarded as both necessary and appropriate in the face of the crisis. Indeed, some argue that even greater fiscal action is needed. Some economists, for example, have pointed to the proposed $2 trillion US infrastructure plan as a model for boosting economic recovery and argued that Europe should follow suit with enhanced member state spending.

However, a growing number of voices are also highlighting the risks posed by the uptick in corporate debt. In particular, many economists and policymakers are worried about the rise of so-called zombie firms. 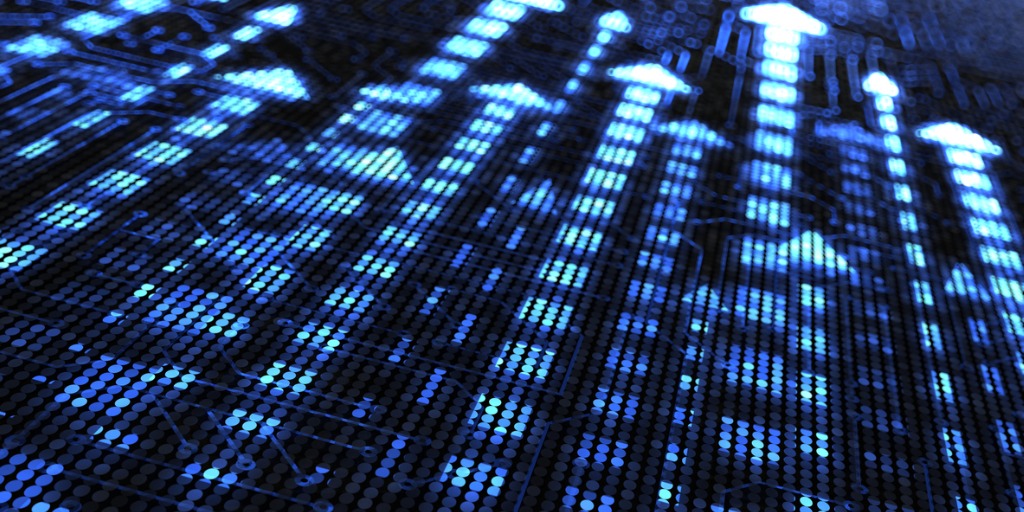 As in horror movies, zombie companies are firms that are neither alive nor truly dead.

Generally, zombie firms are companies that generate enough cash to cover their expenses – specifically, the interest payments on their debt – but have no excess cash that can be used to invest in the business. In this state, they are unable to expand and grow by spending on research and development or hiring new workers. However, they are also not compelled by the threat of bankruptcy to restructure by cutting staff and rationalizing business lines. They simply endure, holding on year after year without noticeable improvement or significant deterioration.

As such, zombie firms can be a drag on the broader economy – they lack dynamism and crowd out other businesses. Zombie firms hog capital and workers, starving out more creative and innovative firms while failing to generate any meaningful productivity growth themselves. When a country plays host to too many zombie firms, they can suck the life out of the entire economy.

This is what some believe happened to Japan. In the 1990s, Japan saw a growing number of firms turn zombie as growth slowed, interest rates fell and banks, reluctant to damage their own fragile balance sheets by foreclosing on struggling businesses, allowed firms to endlessly roll over debt. Many economists attribute Japan’s subsequent decades of sluggish economic growth and deflation to the draining effect of these zombies.

The growth in zombie firms worldwide is a longstanding issue. In 2018, researchers at the Bank for International Settlements (BIS) raised the alarm, reporting that not only had the ranks of zombie firms swelled dramatically since the late 1980s, but that an ever-smaller proportion of zombies were able to recover from their torpor. 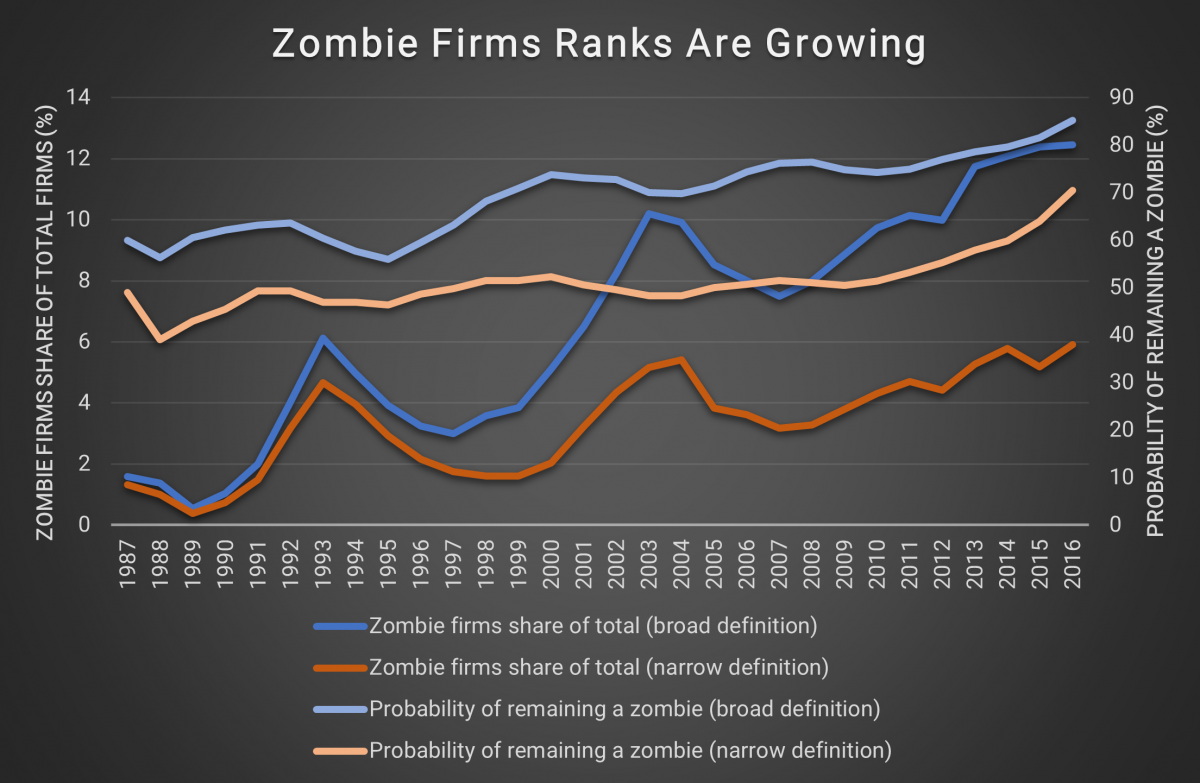 Bank for International Settlements. The Rise of Zombie Firms: Causes and Consequences. September 2018. Broadly defined zombie firms are those with a persistent lack of profitability, defined as an interest coverage ratio of less than one for three consecutive years. Narrowly defined zombie firms additionally require expectations of low future profitability as measured by Tobin’s q.

The BIS attributed this situation to two related developments – structurally and persistently low interest rates, which make it cheaper for weak businesses to service very large debts, and weak bank balance sheets that make lenders reluctant to write off bad debts, instead preferring to roll them over and hope for better days. 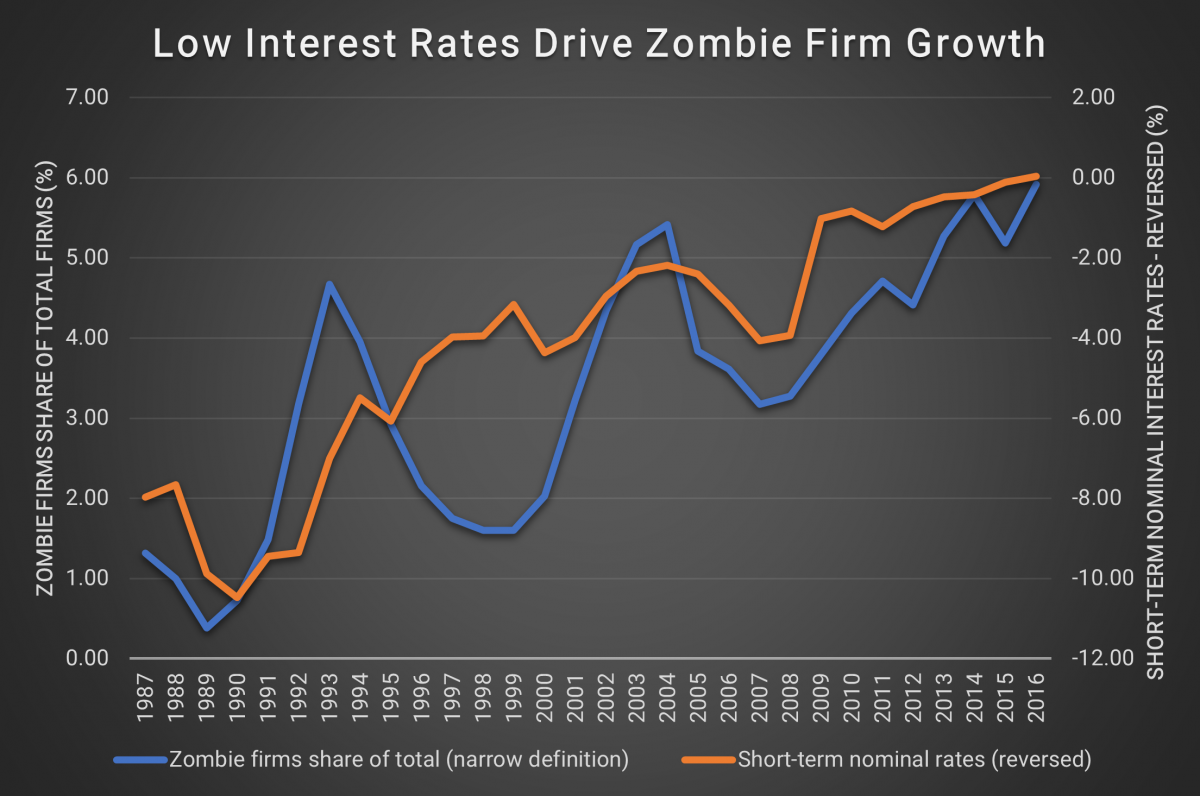 Bank for International Settlements. The Rise of Zombie Firms: Causes and Consequences. September 2018.

There is widespread concern that the pandemic will drive further increases in zombie firms and make it even harder and less likely for them to recover for two reasons.

First, the response to the pandemic has meant that firms have easier access to credit on better terms than ever. As banks and investors have searched desperately for yield, companies have been able to demand ever-better terms on their debt. Huge swathes of the corporate debt market, such as euro-denominated leveraged loans, are now majority “covenant-lite”, meaning that creditors have very limited protections in the event of nonpayment. Appetite for corporate debt has meant that even riskier high-yield corporate bonds have boomed. With markets awash in abundant, low-cost, few-strings-attached capital, there is little reason for zombie firms to restructure and lenders have ceded much of their power to encourage them to do so.

Second, governments’ attempts to “freeze” economies in place at the start of the pandemic may serve to prolong the lifespans of zombie firms. When the pandemic struck, many governments put the economy onto “life support,” attempting to keep jobs and businesses frozen in place in the absence of economic activity. While well-intentioned, this approach may mean that the natural reordering of the economy that should follow the crisis – shifts in capital from weaker sectors to stronger ones, the retraining of workers for new industries, and so on – may not happen. Instead, sectors facing long-term declines may fill up with zombie firms that prevent workers and capital from moving to more productive activity. 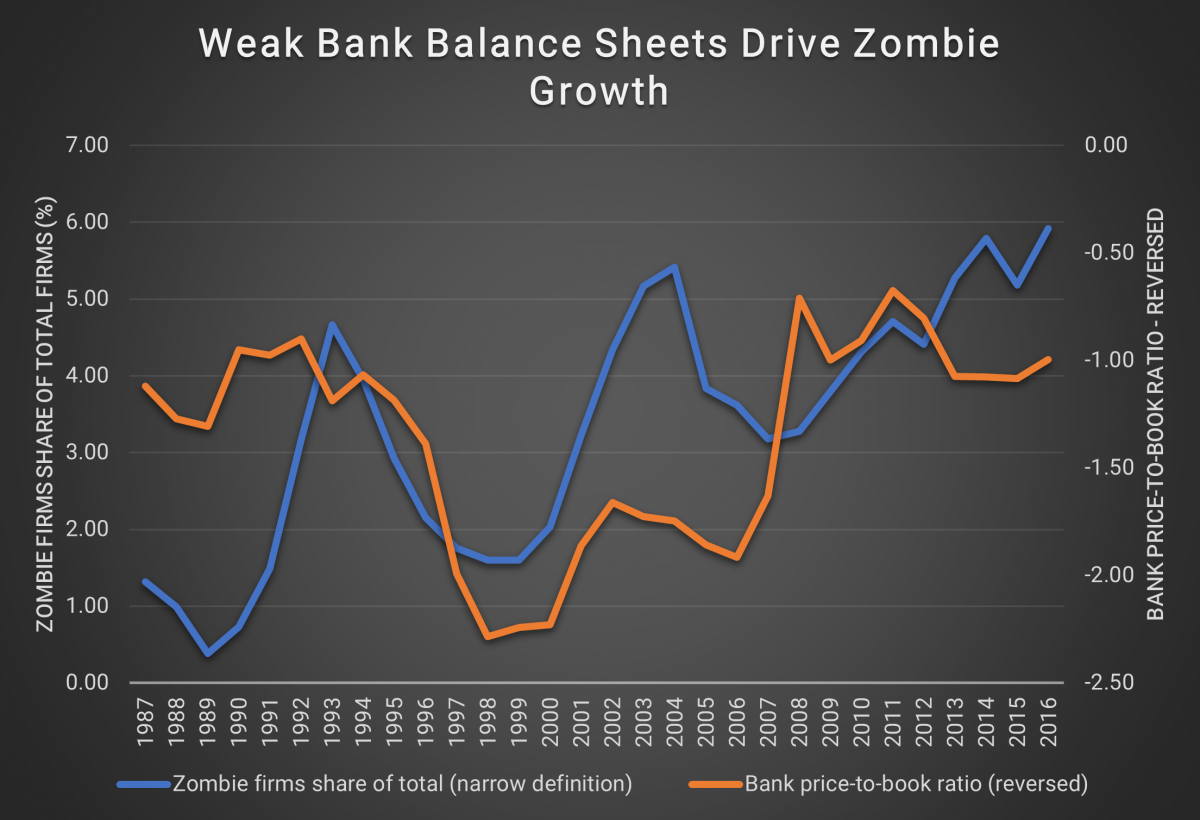 Bank for International Settlements. The Rise of Zombie Firms: Causes and Consequences. September 2018.

The rising proportion of zombie firms filling the corporate ranks represents a significant challenge, not only to long-term economic growth but also to banks and investors.

While rolling over troubled debts may help banks keep their balance sheets looking healthy on paper in the short term, the reality is that – given the low recovery rates for zombie firms – such debts will likely prove to be ultimately unrepayable. By rolling bad debts into worse debts, banks risk compounding their losses and further damaging their balance sheets.

Similarly, investors who have poured funds into corporate debt may find that the true underlying risks in their portfolios are greater than they assume. If the environment is enabling hordes of zombie firms to endure, then there are firms active in capital markets today that are borrowing money they will never be able to repay. Investors who lend to these firms in the hope of achieving higher yields may instead find themselves facing serious losses.

It will take concerted action by banks, regulators, and investors to unwind years of zombie firm growth. Crucial steps include creating smoother and faster bankruptcy processes – the US is a global leader in this area – and increasing dialogue between lenders and zombies over restructuring options. Governments may also consider turning loans into grants for industries that have the potential to bounce back but will never recoup the income lost during the pandemic. Doing so will help avoid creating a generation of government-financed zombies.

Unfortunately, many governments have few incentives to take the steps necessary to combat zombification. Many take a short-term view – they worry that the collapse of these firms could increase unemployment and endanger the banking system – rather than focusing on the long-term health of the economy. The need to rebuild after the pandemic may further reduce governments’ appetites for reform.

Failure to act may have dire consequences. Should interest rates rise or should investors turn against weaker firms, a cascading series of corporate failures is possible, with potentially dire consequences for the financial system. An effective and concerted plan for zombie slaying is needed to avoid being overrun.

Intuition Know-How has a number of tutorials that are relevant to zombie firms, corporate debt, and economic growth: