Skip to content
The Rise And Further Rise Of Bitcoin?

The Rise And Further Rise Of Bitcoin?

Bitcoin, BTC is on a tear. In 2020 Bitcoin rose more than 300%, and in the first two weeks of January it rose 50%. Is this just speculation or are there other drivers behind its rise? The answer is both. Unlike other crypt ’s (which have other uses – Alts are for another article), BTC’s main aim is only to become a global digital currency.

QE and incredible levels of money printing by major economies to boost economic activity, have to devalue fiat currencies and will cause inflation over time. Obviously this undermines Fiat currencies as a store of value long term and Bitcoin is gaining ground as a safe haven store of value. Also the younger generations connect more with bitcoin than with traditional safe havens such as XAU and the dollar and as the world becomes more knowledgeable of bitcoin a certain level of comfort sets in. One of the issues holding major investors back has been the relatively small size of bitcoin as an asset.

To get a perspective of Bitcoins importance in markets the Gold market is currently over $11t and Bitcoin is about $700b and would reach $1t at a price of c$50k (currently at 35k). The fact that the supply of bitcoin, unlike fiat currencies, is finite and limited to 21m coins is in itself a major driver higher. Security of holdings is a strength and also a danger, as interestingly as much as 20% is rumored lost or inaccessible due to lost passwords or hard drives.

Who is it for? Answer anybody. Early on it had a poor reputation and was not widely used or understood, but that is changing over time as more people and institutions get involved and as the value grows and draws in the financial industry and individuals.

Is Wall St now piling into BTC, well despite some headlines – strictly no, but in reality Investment banks and investment companies are opening up to BTC slowly, but honestly real money so far has not bought in. for many investors it’s an insurance against future developments. Activity in bitcoin is hard to track because of its very nature. Most asset managers prefer funds as a way to invest in BTC, as they do in other assets for ease of entry into and out of the asset. An example reflecting bitcoin growth is Grayscale Bitcoin Trust which grew in 2020 from $500m to $6b. Many investors don’t buy bitcoin directly because of the confusion over the future regulatory landscape- not actual current regulations. Recent comments by ECB President Lagarde, noises in India of an 18% tax on cryptos and uncertainty of how it is classified with the tax implications hold back some participation and don’t add to confidence. Obviously global CB’s would want to regulate crypto’s for control reasons and also because of the supposed criminal activity, but their very nature of decentralization makes it difficult to achieve as well as being one of the attractions to investors. If regulators succeed in regulating bitcoin globally this will likely remove many reasons to hold it, depending on how the control shaped up. But perception of a failed regulation may likely add to its aura and value after it recovers.

Is bitcoin close to becoming a real currency for the normal retail investors? No I don’t think it’s even close as entry or egress in the bitcoin market is not efficient. Forget statements of how cheap and easy it is to convert and use because of it being digital with low or no fees; in reality converting from fiat currency to bitcoin and back is expensive and difficult. And then actually using bitcoin as a retail currency is still impractical as its in early infancy, with very few ways to spend actual coin and high real fees if you use a rare crypto card and then lucky if it’s accepted anywhere you wish to spend. This will likely get better but for now, it’s not really useful in the real commercial world and for retail customers it’s a speculative investment or gamble. 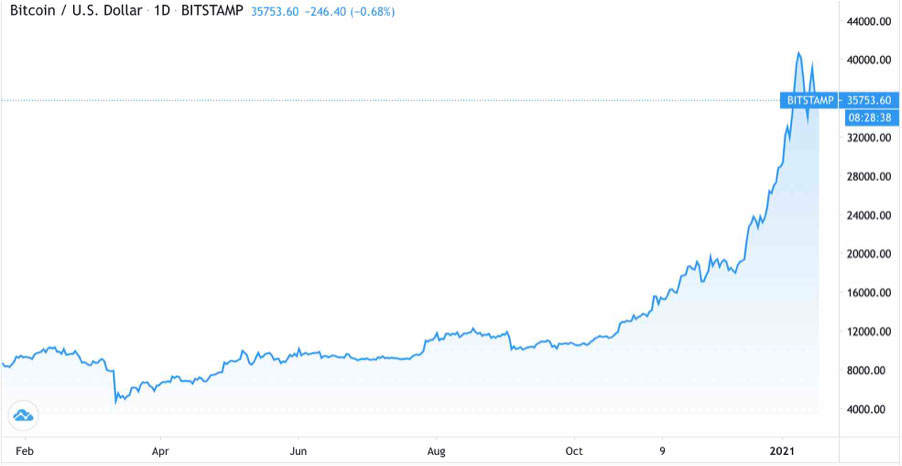 What is its future and what can it become? Pricewise one thing for sure, it won’t behave like a stable coin. JPM predict BTC at $146,000 but it is obviously impossible to know. With limited supply it will undoubtedly rise as long as the world continues to print money and deflate Fiat currency value, regulators fail to control it and if it avoids any tech issue to undermine confidence of users and investors. However high it goes the true impact to the world though is in its technology – blockchain.