Skip to content
Year of the SPAC? Opportunities and Risks in the Listings Boom

Year of the SPAC? Opportunities and Risks in the Listings Boom

In recent years, special purpose acquisition companies (SPACs) have exploded in popularity and today, they account for a sizeable proportion of total IPO funding. Once viewed as a listing backdoor for weaker firms, they are now seen as an efficient and simplified vehicle for taking companies public. However, the boom has fueled worries of a SPAC bubble. There are questions around the quality of SPACs, particularly those without experienced backers. There are also concerns about the costs associated with these vehicles and their profitability. As the flood of new listings continues, do SPACs offer an attractive opportunity for investors?

SPACs are having a moment. With celebrities like Shaquille O’Neal, Serena Williams, Jay Z, and Ciara joining the ranks of SPAC investors – along with financial figures like Peter Thiel, Richard Branson, and Bill Ackman – SPACs are enjoying a cultural moment and attracting major capital inflows.

According to a recent study by Michael Klausner and Emily Ruan of Stanford University and Michael Ohlrogge of New York University, SPACs have seen near-exponential growth over the last few years. Between 2009 and 2014, SPAC funding accounted for less than 5% of total IPO funding. By 2017, that proportion was over 15% and by 2020, it was close to 45%.

What is a SPAC?

SPACs are created by backers eager to acquire an existing business. Generally, SPAC founders have a target in mind, but do not name it to avoid the need for disclosures. Instead, they list as a “blank check” company, raising funds for the purpose of acquisition with no named target.

Once listed, SPACs typically have two years to complete an acquisition, failing which they must return funds to their investors.

They generally approach a target and merge with it following a shareholder vote and additional capital raising. The cash raised by the SPAC then becomes capital available to the newly public, merged firm.

The SPAC boom has been driven, in part, by pent-up IPO appetite. Many firms, particularly tech firms in the US, want to list but find the traditional IPO process frustrating. There are strict rules around disclosures that prohibit firms from making overly optimistic statements about their prospects, and investment bank advisory fees are high. Some would-be listed companies also feel that their bankers set IPO prices artificially low to provide a post-IPO “pop” to their investor clients.

SPACs offer such firms an attractive shortcut. There are few restrictions on what SPACs can tell investors about acquisition targets – projections can be as rose-tinted as they like. In theory, fees should also be lower, and the issue of price doesn’t arise – prior to the merger, companies know exactly how much money they’ll be receiving.

However, some have raised doubts about SPACs’ claim to be a faster and more efficient listing option.

On average, SPACs perform poorly on many metrics.

Klausner, Ruan, and Ohlrogge report that there is considerable dilution built into the SPAC structure. SPAC founders receive “promote” shares – essentially free shares in the vehicle which dilute the holdings of investors who plump up cash. In addition, early investors receive warrants giving them the right to buy shares at a given price in the future. These warrants are still good even if those investors redeem their shares. Klausner, Ruan, and Ohlrogge report that, in practice, many early institutional investors redeem prior to the merger, but use their warrants after the merger to buy shares in the merged entity at an attractive rate. This strategy is highly profitable for those who redeem, but it dilutes those – often retail investors – who buy after the listing and hold until after the merger.

What’s more, SPAC listings tend to underperform (see chart). After three months, the median return on post-merger SPACs is -14.5%, almost 33% lower than median returns on traditional IPOs. Even worse, the performance of SPACs deteriorates over time. 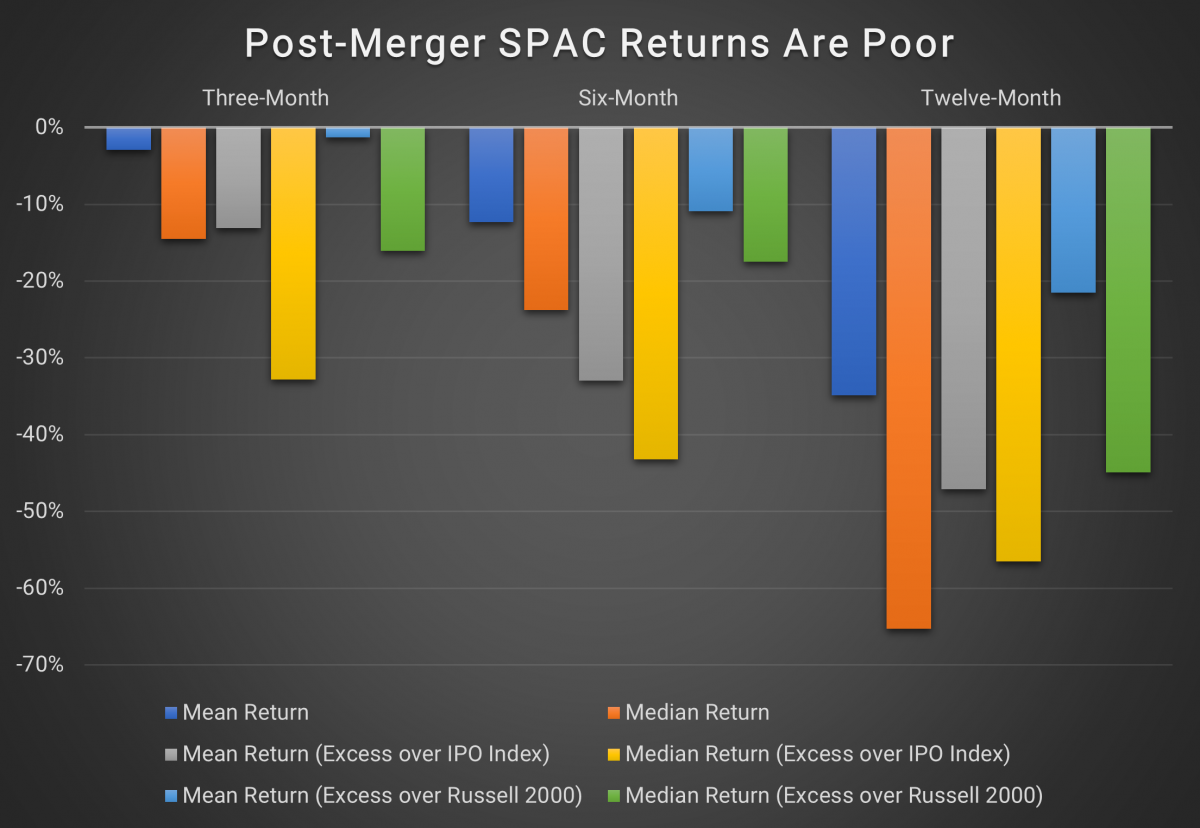 It appears that in many cases, founders and initial investors who redeem prior to the merger enjoy reasonable returns, but that those come at the expense of buy-and-hold investors who face significant dilution. This is a concern as the Financial Times reports that up to 40% of trading in SPACs is by retail investors – double the proportion for S&P 500 and Russell 2000 stocks. This implies that some SPACs are effectively a way for institutions to skim money off less-informed retail investors.

Against this backdrop, the US SEC has opened an informal investigation into SPACs. These vehicles are effectively a combination of IPO, takeover, and private equity fund that are offered to retail investors on the same terms as other traded equities, with limited risk disclosures. As such, there is concern about how the risks are being managed and what fees are being levied.

Interestingly, retail interest in SPACs is also reportedly having negative consequences on the SPACs themselves. The Financial Times reports that as more retail investors pile into SPACs, it is getting harder for these vehicles to get deals done because retail investors are less likely to participate in shareholder votes. SPAC rules typically require a majority of shareholders to agree on an acquisition. For SPACs with a significant share of retail investors, this can be difficult to achieve due to poor shareholder turnout.

Not all SPACs are created equal. Many have been founded by highly informed and experienced industry specialists with a clear acquisition mandate. These high-quality vehicles have demonstrated an ability to deliver meaningful returns to investors, and many of them have transparent and fair rules around promote shares and warrants.

However, the boom has also meant that many SPACs have launched with inexperienced and even unscrupulous backers seeking to profit from the SPAC mania. These vehicles are generally a poor option for investors compared to traditional IPOs or general market index funds.

As the SPAC universe expands, greater regulatory scrutiny and increased investor awareness will likely serve to weed out bad actors. For now, however, would-be SPAC investors should take a cautious approach and seek out all available information.

Intuition Know-How has a number of tutorials that are relevant to SPACs, IPOs, and M&A: