The Covid crisis was just one of a number of factors that challenged traditional notions and habits around money. New technology has already transformed people’s relationship with legal tender but more profound questions over “ownership” of money and payments systems are emerging. Against that background, central banks are accelerating their efforts in the area of digital currency.

Debate on the nature of money has hardly been as intense in living memory. The rise of digital currencies brings new levels of convenience and utility, but raises issues around fundamental attitudes towards money and monetary systems.

Fiat currency (money created under central bank ‘fiat’ or decree) has always needed the confidence engendered by central authorities for its legitimacy and adoption. But that historical confidence and legitimacy in the eyes of the public – while still relatively solid – is subject to a range of converging forces, affecting the perception of current and future manifestations of money.

First, there has been the quantitative easing policies pursued by central banks around the world since the global financial crisis of 2008, coupled with the rise of modern monetary theory (MMT) – a theory that posits that central banks who issue their own currency should issue just as much of it as they see fit in pursuit of their economic objectives.

In the eyes of some, it follows that the vast sums of money created by central banks – apparently out of thin air – in their efforts to stave off global recession, undermine faith and diminish the value of local currencies. Yet this massive increase of money in circulation found its way into rising asset prices rather than inflation. This, however, is no longer the case, and inflation is very much uppermost in the minds of the public as a range of factors force up prices at rates not seen this century.

One foundation of the fiat currency regime has been the lack of alternatives and another factor confronting traditional notions of money is the rise of cryptocurrency. One of the stated benefits of crypto – if not the major benefit as expounded by its promoters – is its decentralized nature. Cryptocurrency brings the prospect of a financial system operating outside the jurisdiction of governments and banks, so is hardly surprising that central banks have opposed the idea from the outset.

This opposition ultimately led to the effective demise earlier this year of Facebook’s proposed stablecoin Diem (a stablecoin is a type of digital currency intended to be less volatile than cryptocurrencies through its linkage with national currencies). The potential for cryptocurrency to serve as a haven for illicit funds is also a major concern of central authorities.

Above all, central banks are determined not to surrender their role as guardians of monetary sovereignty. The rise of highly volatile cryptocurrencies has led to concerns over financial stability and hence the European Central Bank, Federal Reserve, and Bank of England are all engaged in plans to launch their own digital currencies.

Related article: Regulation Could Help Move Cryptocurrencies into the Mainstream but Regulators Have Been Slow to Step Up

Nowhere are central bank digital currency (CBDC) plans more advanced than in China where the authorities are seeking to ensure that they retain control over a payments system that looked set to be taken over by the country’s giant tech players. By the end of last year, the People’s Bank of China’s digital yuan pilot declared that its digital currency system was now being used by around 1% of its population (some 14 million people).

For some, the urgency with which China is pursuing its CBDC agenda is consistent with a wider geopolitical agenda. The prospect of a digital yuan available worldwide is potentially a threat to the global supremacy of the US dollar as the world’s reserve currency.

A survey conducted in November 2021 by OMFIF and G+D showed a sharp difference in attitudes toward CBDCs between consumers in developed and developing countries. Some 90% of consumers in Nigeria and 60% in in Indonesia said they are likely to use CBDCs. The equivalent figures for the US and Germany were 24% and 14%, respectively. 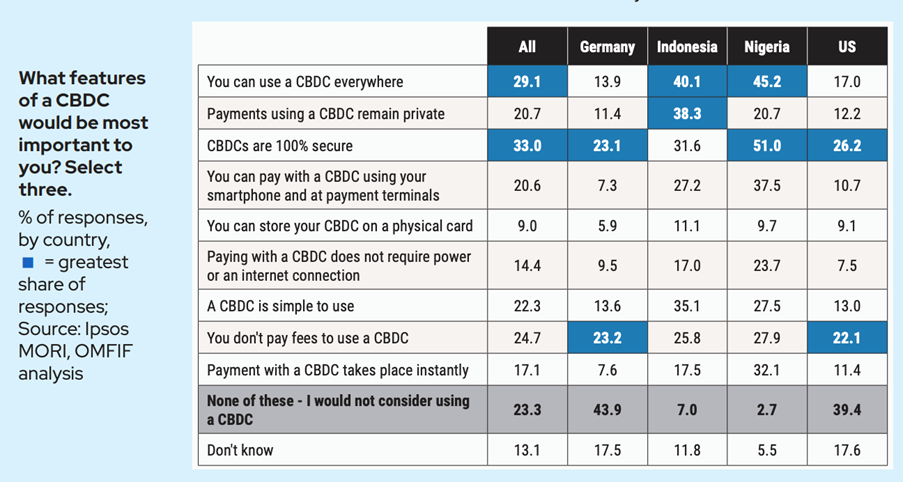 A central bank-issued CBDC retains all of the features and advantages of regular fiat-issued legal tender but it exists outside existing digital payment systems in that commercial banks are excluded from the transaction chain. Under CBDC, payment transactions take place instantaneously through a single digital ledger, doing away with the present requirement to pass through multiple banks – something that results in delayed processing over several days in many cases and particularly for cross-border transactions.

Additionally, consumers using CBDC would have no need to hold a commercial bank account – something with positive implications for financial inclusion. Gone also would be the fear of a banking failure as CBDC carries a government guarantee.

Given these attributes, what role commercial banks will play in future CBDC payments systems is central to debate on their design, as widely-adopted CBDC threatens to remove or diminish banks’ traditional retail funding sources.

Retail payments, and in particular cross-border remittances, have been at the heart of the FinTech wave, as new entrants correctly identified the obvious inefficiencies and expense in existing cross-border arrangements.

For emerging markets, the attractions of CBDC are many. It promises to be a major boost for financial inclusion, yet affordable communications technology is still just a dream for vast numbers of people, so central banks are considering how to include offline functionality in CBDC systems.

Development in wholesale CBDC is less marked than retail with some concern that technologies advanced may not possess the security features that capital markets demand. Nonetheless, progression in the CBDC arena is certain to transform wholesale markets.

The next 12 months will see significant progress in retail CBDC development among the major financial blocs. The challenge for central banks in their efforts to retain control of monetary systems and preserve stability is to achieve this while not stifling innovation in the private sector. Technological considerations may be among the least of the issues of concern. Instead, the challenge is to drive acceptance and to convince the public of the benefits of CBDC while securing political support, establishing standards and cross-border interoperability, and drafting international regulatory commitments.

Intuition Know-How has a number of tutorials that are relevant to this article: